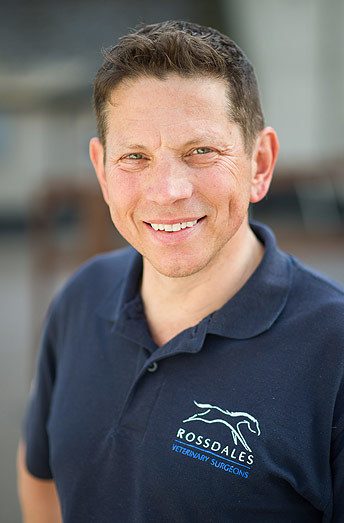 Andy's main areas of speciality lie in orthopaedic surgery and lameness, especially related to competition horses. He has always been interested in the application of novel diagnostic and therapeutic techniques to lameness problems and poor performance. He is a Diplomate of the European College of Veterinary Surgeons and holds the Royal College of Veterinary Surgeons (RCVS) Diploma in Equine Orthopaedics. He is recognised by the RCVS as a Specialist in Equine Surgery.

He has been team vet to the Japanese and British Three Day Event Teams and the British Pony Showjumping Team, as well as working for numerous private competitors at competitions and championships. He was an official treating vet for the 2012 Olympics in London.

In 2015, Andy was awarded Diplomate status by the American College of Veterinary Sports Medicine and Rehabilitation (ACVSMR), which means that he now holds diplomas in three separate areas of expertise (surgery, orthopaedics and equine sports medicine).