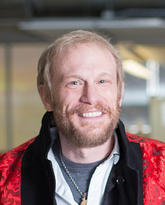 Dr Boysen graduated from the Western College of Veterinary medicine (WCVM), Saskatoon, Saskatchewan in 1996, worked in private practice for a year and then completed an internship at the Atlantic Veterinary College in Prince Edward Island. He spent a year as an emergency clinician in Chicago before completing a residency in small animal emergency/critical care at Tufts University in Massachusetts. He became a diplomate of the American College of Veterinary Emergency and Critical care in 2003 and worked at the University of Montreal veterinary teaching hospital from October 2003 to December 2008.

Dr. Søren Boysen joined UCVM in January 2009. He is a Professor in small animal emergency and critical care in the Department of Veterinary Clinical and Diagnostic Sciences. His clinical home is predominantly based out of Western Veterinary Specialist and Emergency Centre, although he also contributes to student teaching and case consultation at the CARE Centre. He is actively involved in both the American and European veterinary emergency and critical care societies, as well as the Veterinary trauma initiative, serving on several committees for these organizations.

He is an internationally recognized lecturer, speaking at numerous international conferences around the world. Although he is happy to speak on any small animal emergency and critical care topic his true passion lies within emergency point of care ultrasound, perfusions, hemorrhage and shock.

Dr. Boysen is also heavily integrated in teaching and learning within the UCVM program, teaching across all 4 years of the undergraduate program, as well as working with the interns and being a member of the Teaching Academy for the University of Calgary. He has received several teaching awards over the years for his contribution to higher education within the veterinary curriculum.